Finally, back in the blogging game!  Apologies all around for not blogging for a while, I’ve been on an awesome trip to the land of kangaroos and expensive pints.  When I returned it was so depressing even the thought of blogging was too much to handle.  So while we were in Melbourne we took in a couple of gigs, the first being Violent Soho, supported by Velociraptor.  I’d not heard any of either band’s music but decided to go along anyway as it was cheap and they were playing at Ding Dong, a Melbourne gig venue/institution which I will always love, even though it was half burned down and rebuilt into something not nearly as dingy or dirty as the first incarnation (sadly – I miss the broken toilet doors and giant bum poster over the DJ booth).  Velociraptor just stole the night for me.  According to their twitter they are a ‘Brisbane garage-pop 12 piece band of legend’, but tonight there would only be 7 of them on stage.  A tiny stage.  The guys from DZ Deathrays (who I’ve photographed previously here) are also in the band, taking more of a back seat while the alternating drummer/vocalist stole the show.  And they really did steal the show – mincing around, jumping into the crowd, pulling shapes… my only regret is not getting down the front to take photos of them closer up.  The crowd were getting into it, singing along occasionally and dancing like idiots.  Excellent.

After all the excitement of Velociraptor the crowd had increased in size so we had to move to a different spot, which was difficult to get any decent shots of Violent Soho.  No bother really though because I was still buzzing about Velociraptor too much to care.  Violent Soho were great, and clearly had a lot of Melbourne fans judging by the crowds reception of them.  I know it’s not a competition, but this was one of those rare times when the support band stole the night for me.  If you get a chance to see Velociraptor at any stage, definitely do it.

Here are a few shots of the evening.  I kept on focussing too much on the drummers so a lot of my (discarded) shots were out of focus on the other band members… lesson learned!  These were all taken with my Canon EOS 1000D, with my 50mm 1.8 lens.

Error: Twitter did not respond. Please wait a few minutes and refresh this page. 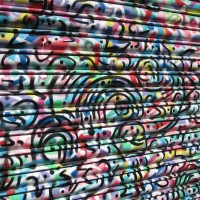 A journey of self learning and growth

Another Kind Of Mind

A Work In Progress

A Britpop party. First Friday of every month at the Buffalo Bar, Highbury Corner

photographing gig action in and around London town

My Manchester, By Cheryl x

The things I love about Manchester, including some personal ramblings x

Land of Sunshine
everything you touch turns to gold

A blog concerning films, filmmaking and the films made by Strange Tea Productions. Did I mention it was about films?